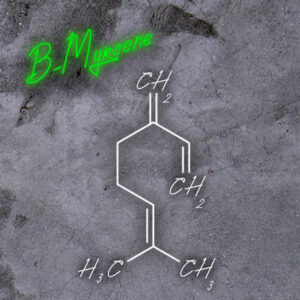 β-Myrcene (pronounced “beta-myrcene”) is classified as a monoterpene; it is an element found in the essential oils of fruits, vegetables, and herbs. More impressively, many monoterpenes are also proving effective against battling cancer in both early and advanced stages.
However, you don’t need to be suffering from major illnesses to benefit from β-myrcene, since it offers multiple benefits to the human system.
Other monoterpenes you will find among our various strains, and which are examined in greater detail under their own Terpene Talk pages, are as follows:

Where You Can Find β-Myrcene

You can find β-myrcene in a variety of herbal plants and fruits, such as:

β-Myrcene is famous for its noticeably earthy fragrance, although, depending upon the individual doing the sniffing and the addition of other terpenes, you can get a range of fragrant descriptions, including:

As with any terpene, not enough studies have been performed to absolutely declare specific health and wellness benefits, but the overall consensus, combined with decades of anecdotal claims, shows that β-myrcene appears to demonstrate the following beneficial properties:

Remember, that β-myrcene is often just one of many terpenes found in different Fern Valley Farms strains, meaning that the above benefits are merely a partial representation of the full effects you may experience and enjoy when β-myrcene mixes with other terpenes.

If you’re sold on the fabulous powers of β-myrcene, then you want to know which of our flower strains includes it (and how much) in their terpene profile. We recommend using the following list of Fern Valley Farm hemp flower strains (listed by mg per gram, in descending order) for a quick and reliable reference chart to make your β-myrcene shopping that much easier…

Want to learn about more terpenes? Visit our main Terpene Talk page, where you will find a list of individual Terpene Talks at the bottom of the page.

© 2022 Fern Valley Farms. All Products Contain Less Than 0.3% Delta 9-THC You must be 21or older to buy from this website